On March 14th 2020 our latest proselyte, Hannah, was formally admitted to Judaism by Rabbi David Hulbert. Unfortunately, due to the COVID-19 pandemic no where near the number of people who normally attend were in able to witness this huge event in Hannah’s life. None the less, Hannah was joined by her parents and members of the congregation  were delighted to witness Hannah’s formal admission. Geoff our Chair gave Hannah a small gift as is our practice, from the congregation to mark this special event in Hannah’s life. 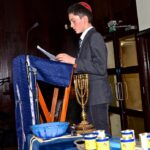 In the evening of Saturday 25th January, Tikcah Chadasha once again teamed up with the Christian Friend’s of Israel (CFI) to commemorate The Shoah (Holocaust) were some 6,000,000 Jews, around two thirds of the world population of Jews, lost their lives in concentration camps at the hand of Hitler and the Nazi’s.
Whilst Jew’s were by far the largest single group targeted by Hilter, we should also remember that the Nazi’s also targeted other groups. It is estimated that approximately 500,000 Roma (Gipsy’s) 1,200 Jehovah Witness’s and 15,000 homosexuals mainly male were also taken to concentration camps where they were murdered.
This year, at the service of Commemoration we had a truly inspirational speaker, 90 year old Ernest Simon. Born & brought up in the Jewish ghetto of Eisenstadt, Austria, home of the
Eszterhazy family and Joseph Haydn. Ernest escaped to England as a child refugee on a Kindertransport in January 1939, where he grew up in Leeds, studied Economics. Ernest did National Service in the RAF, training as a Russian language interpreter. He eventually
worked for ICI & spent much of his working life on the continent of Europe.